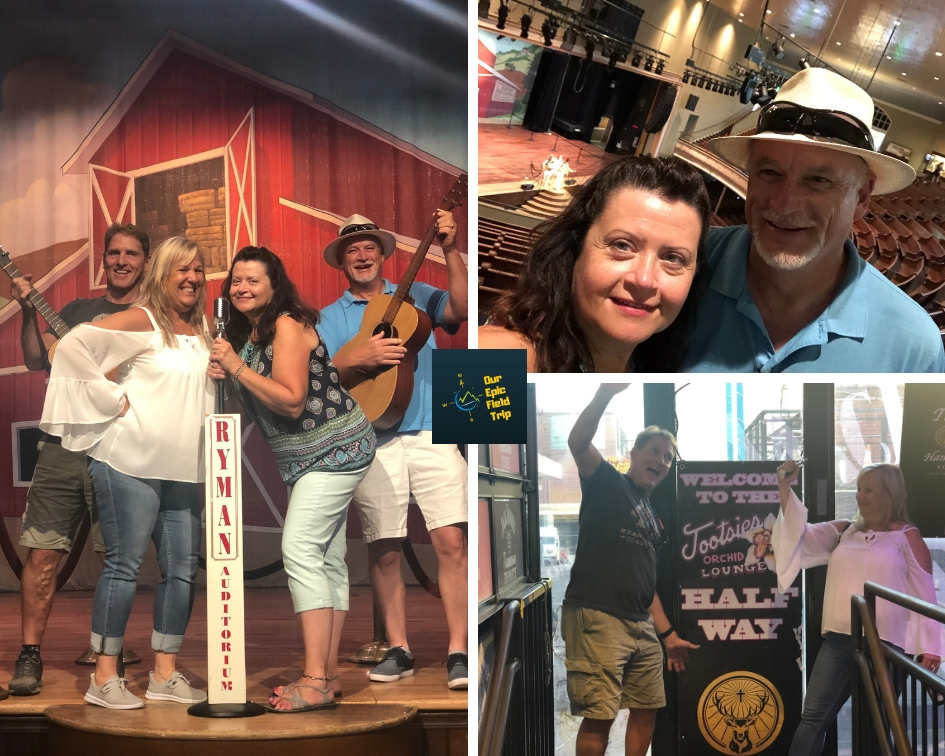 We’ve been on a roll lately with being able to meet up with RV friends. We first met Chris and Donna Clark of Runaway with the Clarks last October right before NomadFEST. They were at the same campground we were at along with Phil and Stacy Farley of You, Me & the RV. After our initial meeting at The Ole Towne Cotton Gin RV Park, we palled around at NomadFEST and then met up again for the Annual Xscapers Bash in January in Lake Havasu, AZ. We followed up the bash with some boondocking down in Quartzsite and Empire Ranch and also met up briefly at a winery in Texas. Sadly, we went our separate ways in March, but we had a chance for a week long visit in the Natchez Trace area of Tennessee during the last week of May.

We had a busy week planned with Chris and Donna. In addition to completing some projects on our rigs, we also wanted to have some fun, and with these two around, there’s never a hard time finding fun ! Exploring the Natchez Trace area, we spent an afternoon at Amber Falls Winery for their annual Cajun Fest event. It was a very warm day, so we indulged in some of their Peach WineTeaZer and enjoyed the live Zydeco band. We also checked out some of the historical sites on the Natchez Trace Parkway near Meriwether Lewis Campground.

Nashville Hop on Hop off Trolley

The real highlight of our fun with the Clarks was our day trip in to Nashville. None of us had ever spent time seeing the sights in Music City, and we’ve all been fans of country music, so we were very excited to hit some of the hot spots around town. We started with a tour of the city via the Hop On Hop Off Trolley. I always recommend this as a great way to get oriented in a city you’ve never been to before. We loved getting to see the iconic Ryman Auditorium and were very impressed by the wealth of historical information delivered in creative and interactive exhibits. We were surprised to learn The Ryman is not just a venue for country music but has hosted a wide spectrum of entertainers and luminaries, from musicians of all genres, to politicians, scientists, comedians, and more. It’s truly a national treasure.

We spent the evening strolling from one honky tonk to another. With hundreds to choose from, we had made a short list of places we really want to check out. Many of the honky tonks on Broadway are named after various country music stars, but not necessarily owned by the star. That’s not the case with AJs Good Time Bar, which is owned by Alan Jackson. This place has four levels, each with a different vibe including live band, acoustic, and hill billy karaoke. Tootsie’s Orchid Lounge is the legendary neighbor to The Ryman where stars often come to unwind after a performance and sometimes please the crowd with an after-the-show show. Nashville City Search voters recently selected Legends Corner as the number one Country Bar in Nashville. At this saloon, the music never stops and you may hear musicians that are currently opening for big name artists. Mine and Scott’s favorite country bar was The George Jones. His legendary voice weaves through our childhood memories, and we’ve enjoyed more than one sing-along evening to his hits. It was a real pleasure to see that the establishment named for him is something he would be proud of.

It was a real treat to experience Nashville with Chris and Donna as they have the same fondness for country music as we do and are even more knowledgeable about the music genre’s highlights. We all agreed that we need to come back and stay closer to the city so we can spend more time soaking up the atmosphere on Broadway as well as checking out more of the city’s landmarks. We’ll have to get that on our calendars sooner rather than later !

Check out THESE POSTS to see more of our destination tips and adventures.

We'd love to continue this discussion . . . Leave us a comment here . . . (Your email address will not be displayed): Cancel reply